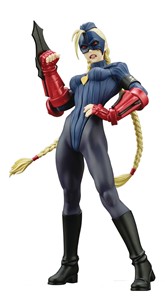 Koto's newest Bishoujo statue from Street Fighter is none other than Decapre! Based on the illustration by Shunya Yamashita, Decapre is seen in her costume from Street Fighter Zero 3. Her appearance resembles Cammy, albeit with the Shadaloo Doll outfit and a blue-gray metal mask. Her hair is platinum blonde, and is styled in the same long pigtails as Cammy. Her face is shown to be burned on the left side, hence the mask. Decapre wears a pair of retractable daggers that are significantly larger than Vega's claw and emit Psycho Power. Perfect to display alone or alongside other Kotobukiya Street Fighter Bishoujo statues such as Chun-li and Cammy!