Song of Ice and Fire: Starter Set - Stark vs. Lannister 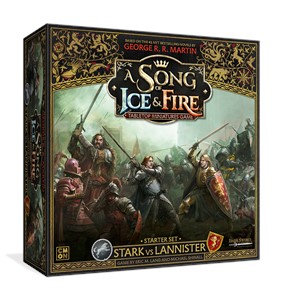 A Song of Ice and Fire: Tabletop Miniatures Game is a new miniatures game designed by Eric M. Lang and Michael Shinall. You and your friends will lead armies from your chosen Houses into battle, controlling trays of infantry, cavalry, and more from throughout the A Song of Ice and Fire novel series. Iconic characters such as Jaime Lannister or Robb Stark – both available in the two-player starter set heading to Kickstarter later this year – can lead your troops, providing special abilities to the units they are assigned to. Even those who choose a more political battlefield, such as Cersei Lannister, have an impact on the battle by giving new tactical options via the Tactics Deck. The rules are designed to allow veteran tabletop miniature players a wealth of strategy, while players new to the table will find the game accessible and easy to learn, no matter the size of the battles.