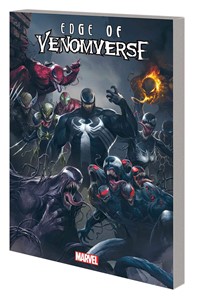 Written by Matthew Rosenberg and others; illustrated by Roland Boschi and others

Before VENOMVERSE, there is EDGE OF VENOMVERSE! It's a symbiotic smorgasbord of stories, each featuring a major character becoming Venomized - all destined to feed into the main event itself! When the young mutant clone designated X-23 bonds with an alien parasite, can she hold it together - or is she doomed to give in to bloodlust? It's a nightmare in pink when Gwenpool turns into a sword-slinging, web-swinging master of disaster! Robbie Reyes becomes the symbiotic spirit of vengeance, the Host Rider! Years in the future, meet the lethal Wolvenom in a terrifying tale set after the epic events of the original OLD MAN LOGAN! And when Deadpool bonds with Venom, just call him the Symbiote with the Slobber! Plus: War stories featuring Venomized versions of Punisher, Rocket Raccoon and more! Collecting EDGE OF VENOMVERSE #1-5 and VENOMVERSE: WAR STORIES #1.