Catan: Game of Thrones - Brotherhood of the Watch 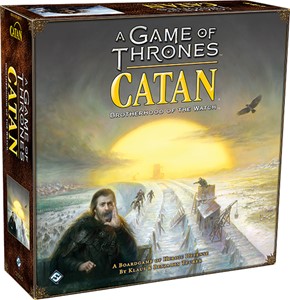 The battle to defend the Realms of Man begins in A Game of Thrones Catan: Brotherhood of the Watch, a new strategic game grounded in George R. R. Martin’s A Song of Ice and Fire series and adapted for the beloved Catan tabletop game by Klaus and Benjamin Teuber.

The Brotherhood of the Night’s Watch is searching for a new Lord Commander. They are looking for a stalwart individual to repair the failing infrastructure of the wall and work towards developing the neglected Gift. Harvesting the resources from this bitter northern environment was never an easy task, but the brothers must also build up their order to better defend the Wall against the threat of Wildlings. Players must build settlements and keeps, defend the Wall from invasion, and prove themselves to be worthy of the title of Lord Commander. But be wary—the north holds many dangers, and winter is coming.