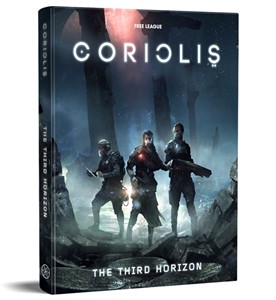 Based on the rule set introduced in Mutant: Year Zero, Coriolis is a science fiction role playing game set in a remote cluster of star systems called The Third Horizon. It is a place ravaged by conflicts and war, but also home to proud civilisations, both new and old. Here, the so called First Come colonists of old worship the Icons, while the newly arrived Zenithians pursue an aggressive imperialistic agenda through trade and military power.

In this game, you will crew a space ship and travel the Horizon. You will explore the ancient ruins of the Portal Builders, undertake missions for the powerful factions and partake in the game of political intrigue on Coriolis station - the centre of power in the Third Horizon. You might even encounter strange beings from the dark between the stars.

From the Monolith in the jungles of Kua to the floating temples of Mira, the Horizon is yours to explore. You can be traders, explorers, mercenaries, pilgrims or agents. Whatever your calling is, together you will make your own fate. In the end you might even discover the truth about the mysterious Emissaries and the threat of the dark between the stars.