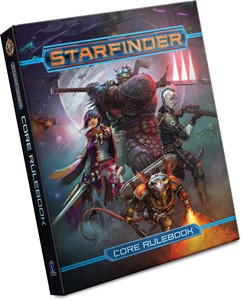 This massive 560-page hardcover rulebook is the essential centerpiece of the Starfinder Roleplaying Game, with rules for character creation, magic, gear, and more—everything you need to play Starfinder as either a player or Game Master! The next great adventure in science-fantasy roleplaying takes off here, and the Starfinder Core Rulebook is your ticket to a lifetime of adventure amid the stars!