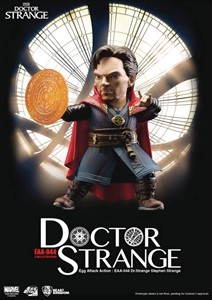 Beast Kingdom is proud to present the Doctor Strange EAA action figure, in all of his reality-altering glory! 26 movable joints throughout the figure allow positioning in any spell casting poses as seen in films. The movable eye mechanism hidden the figure's head and realistic facial coloring truly brings this figure to life. One of Doctor Strange's many mystical items, the Cloak of Levitation is also included. Not only is the cloak removable and intricately colored, details of the embroidery have been painstakingly reproduced. Both offensive and defensive spell effect accessories are included, enhancing the figure's interactivity. Beast Kingdom is extending an invitation to all Doctor Strange fans to join his alternate universe, unleashing magic upon the world, turning it upside down and altering reality!