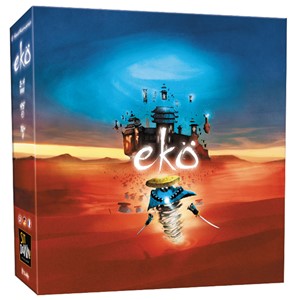 In Ekö, players command the wraith-like armies of four long-dead brothers cursed to eternally wage war against one another in the blasted remnants of a once flourishing kingdom. "Ekö" is the name of their father who actually did a pretty good job of running things while he was around. When he passed away, however, his four sons went to war against each other to seize the crown. They of course laid waste to the entire countryside, wrecking everything their father had built over the decades. Sickened by the death and destruction caused by his sons' power-lust, the spirit of Ekö condemned them to wage eternal war against one another fo all eternity.

The board is composed of hexagon tiles that are arranged differently every game depending on how many players there are. The playing pieces are then also randomly placed on the board. Each player then gets a playmat indicating which faction he controls. The object of the game is to build enough buildings to score 12 victory points or wipe all of the opposing armies off the map.

Although the playing area is very congested at the start of the game, space gets freed up as players use their pieces to build buildings and create stacks making for more powerful combattants. Players have more and more movement options as the game progresses making for an abstract strategy game where the tactical situation is constantly changing.