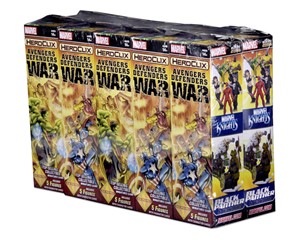 Through the manipulation of Dormammu and Loki, the Avengers and the Defenders are at odds in the Marvel HeroClix: Avengers/Defenders War! With this Marvel HeroClix expansion new figures gain the Shifting Focus mechanic, while Heroes can gain the support of their allies with team building, whether it's Captain America fighting alongside Iron Man, Daredevil teaming up with the Hulk, or even Black Panther leading the Wakandan Warriors. Plus, HeroClix 15th Anniversary Throwback figures hearken to the early days of HeroClix and the unparalleled mysticism of an exciting, new Dr. Strange is unleashed! The Marvel HeroClix: Avengers/Defenders War introduces over 70 new figures to collect and play.