Sentinels of the Multiverse: Shattered Timelines and Wrath of the Cosmos 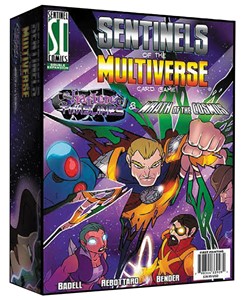 Time and Space collide in this double-expansion to Sentinels of the Multiverse! The timelines that make up the Multiverse roil as otherworldly entities battle across alternate realities! In Shattered Timelines, heroes stand with new allies against villains that travel and transcend time itself! While in Wrath of the Cosmos, heroes must join forces to defend the world from threats from beyond our galaxy. This combined set includes four powerful heroes, eight unique villains, and four perilous environments, involving new mechanics and challenges never seen before, all while expanding the options and dangers of Sentinels of the Multiverse.