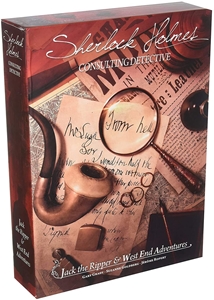 Reenter the gaslit world of Sherlock Holmes in Jack the Ripper & West End Adventures as you race to save London from its most nefarious villain. A new entry into the Sherlock Holmes Consulting Detective game series, Jack the Ripper & West End functions as either a standalone game for new players, or as an extension for your Consulting Detective game. In this new title, you and your fellow detectives must work together to uncover clues, follow leads, and gather evidence in order to solve a variety of crimes from Regent’s Park to London Bridge. The neighborhood of Whitechapel is especially troubled, as many of its female residents have been found slain in the night. Search the dim streets and pore over the day's news in order to piece together the puzzle to stop Jack the Ripper's vicious crime spree.