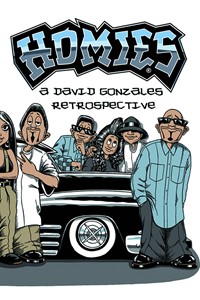 Written and illustrated by David Gonzalez

Created by David Gonzales, the Homies first appeared as an underground comic strip that debuted in Lowrider Magazine in 1978, a reflection of his friends and lifestyle. At first a group of tightly knit Chicano buddies from East Los Angeles, the Homies expanded their crew to over 300 characters from all different cultures, genres, and even species. In an inner-city world plagued by poverty and oppression, they formed a strong, binding cultural support system that enabled them to overcome negativity and turn to laughter and good times as an antidote for reality.

Homies erupted as a mainstream sensation in 1994 when trend-savvy retailer Hot Topic offered Homies shirts for sale, rapidly becoming popular with the youth market. Following on the heels of a successful T-shirt run, Homies was licensed for figurines in the vending machine toy industry, where all sales records were broken, with over 150 million figurines sold worldwide. The licensing program soon spread to products such as action figures, remote-control and die-cast cars, notebooks, posters, plush, Halloween masks, video games, music, and more, carried by specialty and mass retailers everywhere.

History of the Homies is a triumphant celebration of the turbulent times, remarkable artistry, and youthful street culture of a pop culture phenomenon, including hundreds of pictures and a complete guide to Homies figurines.