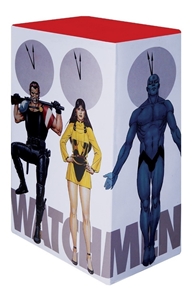 The bestselling graphic novel of all time is back in a new, 12-volume box set collector's edition at DC's Deluxe Edition trim size, just in time for the series' 30th anniversary! It all begins with the paranoid delusions of a half-insane hero called Rorschach. But is Rorschach really insane-or has he in fact uncovered a plot to murder super-heroes and, even worse, millions of innocent civilians? On the run from the law, Rorschach reunites with his former teammates in a desperate attempt to save the world and their lives, but what they uncover will shock them to their very core and change the face of the planet!