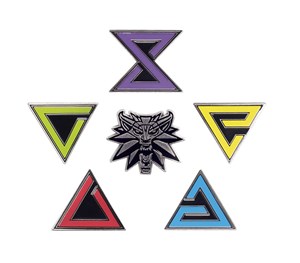 Geralt's witcher medallion is not only an insignia of his witcher profession, but also one of its tools. It can react to sorcerous auras as well as warn of sudden dangers.

Based on the original witcher wolf medallion that Geralt wears around his neck, Dark Horse has sculpted a detailed lapel pin as well as a refrigerator magnet.

The Witcher Enamel Pin Set is a set of six enamel pins that represent Geralt's witcher medallion and the magical signs that witchers can use in combat. Each pin is approximately .75" wide.