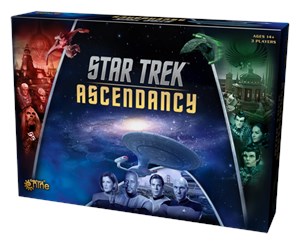 The fate of the galaxy is in your hands in Star Trek: Ascendancy, a strategy board game of exploration, expansion, and conflict in the Star Trek Universe. Drawing on 50 years of Star Trek history, Ascendancy allows you to control the great civilizations of the galaxy - United Federation of Planets, the Klingon Empire, and the Romulan Star Empire - striking out from your home worlds to expand your influence and grow your civilization. Will you journey for peace and exploration - or travel the path of conquest and exploitation? You can command starships, establish space lanes, construct starbases, discover interstellar phenomena, gather resources, and establish dominance in various star systems though diplomacy - or war. Star Trek: Ascendancy features more than 200 plastic miniatures and 30 space systems representing some of the Star Trek galaxy's most notable planets and locations.