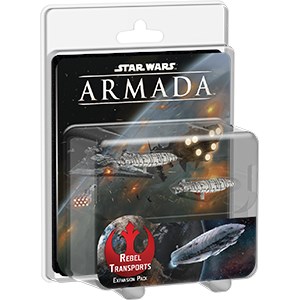 The counterpart to the Galactic Empire's Imperial Assault Carriers Expansion Pack, the Rebel Transports Expansion Pack introduces a flotilla of GR-75 medium transports. You can then field these ships as either GR-75 Combat Retrofits or as GR-75 Medium Transports, the first ship in Armada to have no inherent ship-to-ship combat capability.

Still, for what it lacks in its own punch, the Rebel Transports Expansion Pack more than supplies in support. As with the Imperial Assault Carriers Expansion Pack, four of the eight upgrades in the Rebel Transports Expansion Pack feature the Fleet Support icon. This means you can use a flotilla of GR-75 transports to relay commands to your larger ships with a Comms Net, or you can trail behind your largest ships with Repair Crews to keep them in the fight a bit longer. And that can make the difference between victory or defeat. After all, even one additional round of fire from your Home One is easily going to outstrip the contribution that nearly any other Rebel ship could have made over the course of two or three rounds.

The Rebel Transports Expansion Pack's focus on fleet support does not stop with its Fleet Support upgrades, either. It also introduces a new commander and a crew member who can provide free rerolls to friendly ships within distance one to three.