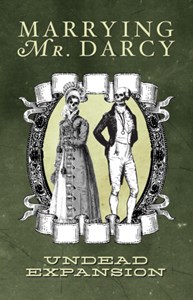 Marrying Mr. Darcy: the Undead Expansion adds the threat of the walking undead to the heroines' attempts to build their character and marry well. Elizabeth Bennet and the other ladies must now face the possibility of undead attacks, undead suitors, and curses, while still trying to marry the suitor that will earn them the most happiness. The ladies may use weapons, stealth, and cures to try to make it to the end of the game, but may end up undead themselves.