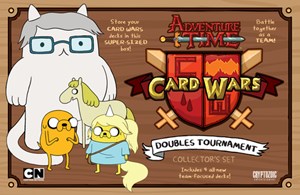 The game you know and love has just doubled down on the fun! Grab a partner and do-si-do your way to victory as a team of two players battling another team of two players. Play as Jake (Cornfield/NiceLands) & Charlie (Blue Plains/NiceLands) vs. Grand Prix (SandyLands/IcyLands) & Moniker (Useless Swamps/IcyLands). All-new cards, all-new original art, with all-new team-rrific effects!

While some of these cards excel in a team environment, there are tons of cards that will find their way into your favorite customized 1v1 decks. Each player has their own deck and will sit in between two opponents, while across from their partner. Two of your Lanscapes veer left, while the other two point right. Each team has 40 Hit Points. Teh first team to drop their opponents to 0 wins the game.

The rules are the same as the 1v1 game, but now you've got to keep an eye on two opponents at once and help out your partner if they are getting pummeled. This set features the debut of Teamwork cards! Each player may control one and they don't occupy a Lane. These cards give you AND your partner a benefit turn after turn... if you play your cards right.