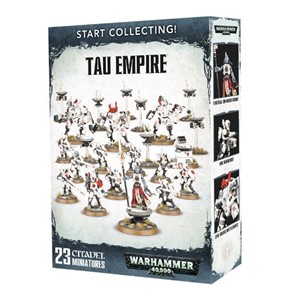 This is a great-value box set that gives you an immediate collection of fantastic Tau Empire miniatures, which you can assemble and use right away in games of Warhammer 40,000! You’ll receive an Ethereal on Hover Drone, three XV8 Crisis Battlesuits, a ten-man Fire Warriors team (including two drones and a DS8 Support Turret) and an exclusive Tau Empire Formation rules sheet - the Ethereal Honour Guard - allowing you to collect, assemble and play with your new miniatures right away!