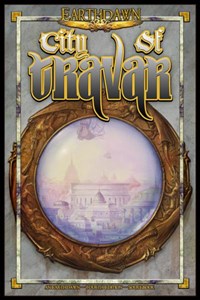 Travar is the first sourcebook planned for the line. It was originally in development for the Third Edition, but never saw print. It will focus on the Merchant City in south-central Barsaive, looking at its people, power structures, and ways to use it as a base of operations in an Earthdawn campaign. It will also look at the Badlands, an area that was heavily ravaged by the Horrors during the Scourge.