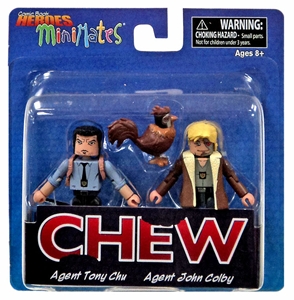 A Diamond Select Toys release!From the world of your local comic shop, it's the first assortment of Comic Book Heroes Minimates, based on some of the most popular independent titles around! Four different two-packs pair up heroes and heroines from six different comics! From Image Comics, Cassie Hack from Hack/Slash teams up with Em Cypress from Revival!

From the world of Valiant Comics, Ninjak takes on Shadowman! From Image's Chew, FDA agent Tony Chu partners with cyborg John Colby and the fighting rooster Poyo! And from Battle Beasts, Ruminant the Giraffe takes on Spyrnus the Hammerhead Shark! Each two-pack comes on a full-color blister card. Designed by Art Asylum!