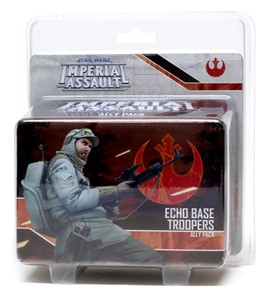 To fight across the galaxy, the Rebel Alliance needs troopers specially trained to deal with extreme environments, such as those stationed at Echo Base. Now the Echo Base Troopers Ally Pack invites you to harness these troopers' uncompromising resilience on any Imperial Assault battlefield. Two sculpted plastic figures bring these soldiers to life and replace the tokens found in the Return to Hoth expansion. With a new campaign side mission, two new skirmish missions, and new Command and Deployment cards, the Echo Base Troopers Ally Pack can help you carry the fight to any Imperial force.