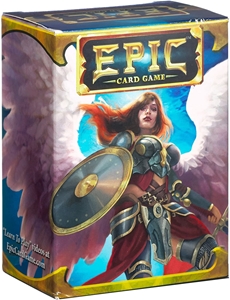 The first war of the gods tore the world apart! Each god continually remaking reality was more than the universe could withstand, and in its wake the great nothingness returned, leaving the gods to bicker in the void. Eventually, a compromise was reached. The gods joined forces to create the universe anew, but this time there were rules that even they must obey. No longer could gods battle directly, tugging against one another on the fabric of reality. Now their wars are fought in the mortal world with mighty champions and devastating events! Epic is a fast-paced, deckbuilding card game of fantasy combat designed by the creators of the Star Realms Deckbuilding Game.