Shadows Over the Empire 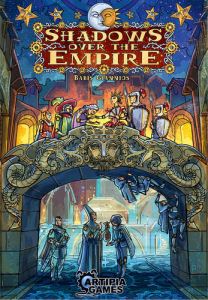 The King is Dead! Cardis has Fallen! After a long siege, the empire of Asmidan has conquered Cardis and the Conclave of Law has been sent by the Emperor to establish the new rule. The city is in disarray and several factions struggle for power behind the scenes. The former Queen is using her influence to gather allies in an effort to help her son claim the throne. The Order of the Coin - a group of wealthy individuals - wants to rise to power ensuring the gold keeps flowing. The Asmidan's Church uses the feared Inquisition to sway whoever opposes it. In Shadows over the Empire, players take on the role of leaders of factions in a struggle for control of Cardis. Loyalties are constantly tested and great allies become mortal enemies in a city filled with desire for dominion. Who will prevail?