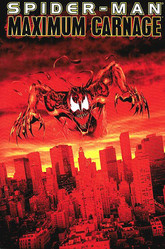 The perennial fan-favorite collection. Carnage, the spawn of Venom, has assembled an army of Spider-Man's criminally insane adversaries to spread his message of hostility, chaos and wholesale slaughter: Carrion, Demogoblin, Shriek, and the Spider-Man Doppelganger! Outmanned and overpowered, the wall-crawler must recruit his own band of super-beings to combat the rising tide of evil: Black Cat, Cloak & Dagger, Firestar, Captain America, Deathlok, and... Venom?! Spider-Man's worst enemy becomes his uneasy ally in the battle to halt Carnage's mad rampage. But when he finds himself at odds with a number of his allies, who want to finish Carnage and his cronies once and for all, Spider-Man must decide whether to violate his personal code of honor to rid the world of pure evil. Can the web-slinger find an alternative before it's too late? Either choice carries dire consequences! Collects AMAZING SPIDER-MAN (Vol 1) #378-380, SPECTACULAR SPIDER-MAN #201-203, SPIDER-MAN #35-37, SPIDER-MAN UNLIMITED #1 and #2, and WEB OF SPIDER-MAN #101-103.