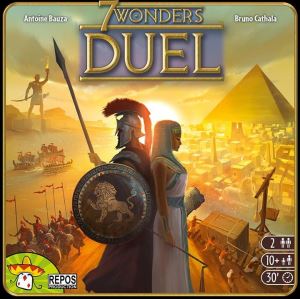 Create the greatest civilization the Ancient World has ever known! In 7 Wonders, you lead an ancient civilization as it rises from its barbaric roots to become a world power. Build an architectural wonder that will fascinate for eons to come, and rule the most powerful civilization on Earth! 7 Wonders: Duel is a fast-paced, two-player edition of Antoine Bauza's award-winning civilization-building game.