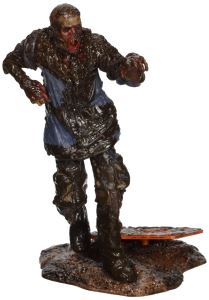 From McFarlane Toys. AMC's The Walking Dead TV series is now the most watched drama in cable history, shattering records along the way with the release of each new season! Season 4 finds Rick Grimes and his fellow survivors continuing to seek refuge in a desolate, post-apocalyptic world and soon discovering that there are greater forces to fear than just the walking dead. The struggle to survive has never been so perilous and McFarlane Toys is sitting shotgun for the ride with its seventh series of AMC's The Walking Dead action figures. Each highly articulated human figure features that actor's likeness and comes with multiple accessories. And each zombie includes features and amazing attention to detail with unique play-action for maximum fun! Michonne comes with approximately 22 points of articulation, katana sword with sheath, Terminus memorial candle and a can of cheese. Carl Grimes comes with approximately 22 points of articulation, removable sheriff's hat, knife, flashlight, Terminus memorial candle and a can of pudding. Terminus leader Gareth comes with approximately 22 points of articulation, pistol and Terminus memorial candles. (Spoiler Alert: Also included is a rotting human carcass, stripped of its meat and hinting at Gareth's true intentions for Rick's group.) The gruesome Mud Walker comes complete with decomposing body and a worm coming out of his nose. You can also split this undead figure in half and mount his upper body on his mud-covered base with flash flood sign to recreate his emergence.