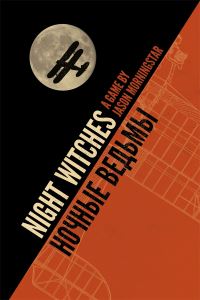 Night Witches is a tabletop role-playing game about women at war. As a member of the 588th Night Bomber Regiment, you’ll answer the call of your Motherland in her darkest hour. Can you do your duty and strike blow after blow against the Fascists? Can you overcome discrimination and outright sabotage and rise above your sexist comrades? Are there limits to patriotism—or endurance? Play Night Witches and find out!

Night Witches requires 3-5 players, who will take turns in the role of game master during the game. It can be played for a single two-hour session or expanded into a literal campaign following the Regiment across the entire Second World War. Either way, you’ll tell an epic tale of heroism and sacrifice that honors the women who did it for real.

The game is based on Vincent Baker’s brilliant Apocalypse World and is heavily modified from that core to meet the demands of Night Witches. We also took inspiration from the many offshoots already on tables everywhere—Dungeon World, Monsterhearts, Sagas of the Icelanders, and others.

In play you will alternate between day and night, with unique moves for each. Days are about renewal and interpersonal conflict, and nights are about hair-raising bombing missions on historically accurate targets across the Soviet Union, Poland, and, in the end, Germany. Missions are crazy dangerous and you have to make hard choices constantly. And when they end, a whole new kind of danger is waiting back at the airbase—paranoid secret police, sexist Red Army officials who want you to fail, and chronic supply shortages are just the beginning of your troubles.