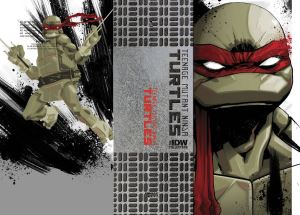 IDW's re-launch of Teenage Mutant Ninja Turtles has been a hit with fans and critics alike. Now, collect the series in all-new oversized hardcovers that present the stories in recommended reading order. Collects the first 12 issues of the new ongoing series plus the Raphael, Michelangelo, Donatello, Leonardo, and Splinter Micro-Series one-shots spliced in between.