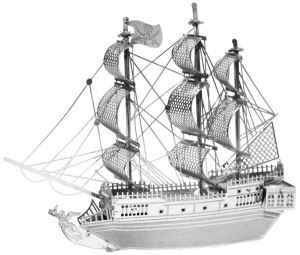 There once was a real ship named Black Pearl captained by Henry Morgan, one of the world’s most notorious pirates. The Black Pearl which first sailed in 1669 fought many battles; the most famous of which was an invasion in Panama in 1671. The following year Captain Morgan was put in prison in England. Years later he returned to Jamaica as a judge and governor. Henry Morgan died in England in 1688 after a long illness.

These amazingly detailed DIY models start as 4" square steel sheets and finish as amazing 3D models. Use the easy to follow instructions to pop out the pieces, bend the tabs, and connect them at the attachment points. Build your collection today!