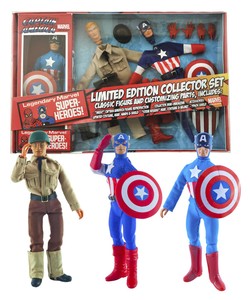 The 1970s live again! The response to DST's new Marvel Retro line has been overwhelming, as fans quiver in anticipation of getting their hands on reproductions of the classic Marvel Mego figures of yesteryear. Now, DST is proud to reveal the next Marvel gift set, featuring Captain America! A reproduction of the vintage Captain America figure comes packaged inside a reproduction window box, alongside two alternate heads, two all-new costumes and a variety of accessories. Dress your vintage Cap figure up as either World War II soldier Steve Rogers or a more realistic version of Captain America! Includes both the original and classic shields, as well as a booklet on the history of Megos! Set comes packaged in a deluxe gift tray. Designed and sculpted by EMCE Toys!