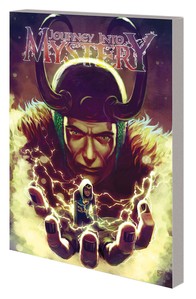 A forgotten hero returns - but will the truth behind his exile consume the world? Only the New Mutants can help young Loki now! Then, civil war breaks out among the British Manchester Gods! But even with Loki's aid, can Merlyn, King Arthur and Captain Britain prevail? And what does Hela want with the Holy Grail?! Meanwhile, Thor is caught in an eternal game between cosmic entities - and when the cursed Vanir return and declare war on Asgardia, Surtur's fire rages across the nine worlds! A desperate Loki journeys into the heart of Surtur's fiery kingdom, but Loki's future and past collide when Thor becomes trapped in the underworld- and the truth about young Loki is finally revealed! Collecting EXILED #1, NEW MUTANTS (2009) #42-43, JOURNEY INTO MYSTERY (1952) #637-645, and THE MIGHTY THOR #18-22 and ANNUAL #1.