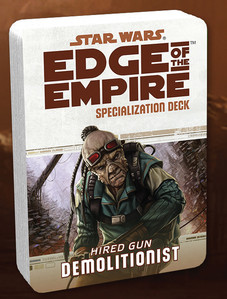 In the heat of battle, find an easier way to manage your character and NPC talents with Star Wars: Edge of the Empire Specialization Decks! Created via FFGs in-house manufacturing, Specialization and Signature Ability Decks for your Hired Gun characters each introduce twenty-two cards that cover the expanded options introduced in Dangerou Covenants! Whether youre laying down cover fire for your crew, making sure an enemy knows his place, or rigging an enemy ship to blow, these new Hired Gun Specialization Decks will keep you focused on the action.