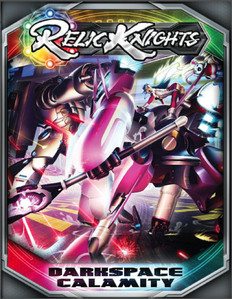 Saviors of the Universe! The Darkspace Calamity engulfs the universe, inexorably devouring galaxies whole, their lights extinguished one-by-one. Only a single galaxy remains, desperately staving off extinction through the might of its heroes. Plunge headlong into this epic conflict with your own cadre of powerful champions to combat the Calamity and determine the fate of the universe in Relic Knights: Dark Space Calamity! A fast-paced, skirmish-level strategy battle game, players in Relic Knights: Dark Space Calamity take control of one of six factions with wonderfully detailed, 30mm-scale miniatures, utilizing unique card-draw mechanics to use their powers ("esper") to unleash devastating attacks and cunning counters upon their foes. Augment your forces with cadres of heroes and warriors to fight even larger, cosmic battles as the universe of play expands.