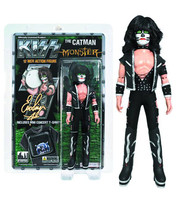 The boys are back with an all-new series of 8' and 12' action figures based on the 20th KISS studio album, 2012's 'Monster'! These retro-style action figures feature Gene Simmons, Paul Stanley, Tommy Thayer and Eric Singer as they appeared on the album's cover. All 8-inch format figures include a mini album cover, while all 12-inch format figures come with a mini KISS t-shirt. Also available are figures of all four members in either 'Demon Bloody' or 'Starchild Feather' variant versions. Blister card packaging.