Sentinels of the Multiverse: Final Wasteland 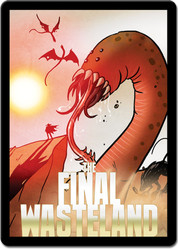 In one of the timelines in the Multiverse, the monsters and bizarre creatures of myths and urban legends grew stronger, lurking in the shadows. Given enough time to flourish and multiply, they finally broke out of their hiding in darkness and obscurity, hellbent on revenge! Decades turned into centuries, and centuries became millenia - the world, now overrun entirely by monsters of all sorts is a terrible wasteland. The Final Wasteland is the true end to all time. Don't think you can overcome its dangers - pray that you might survive it!