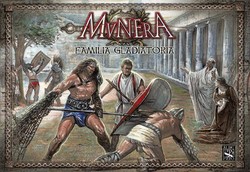 Lead your champions to glory! In Munera: Familia Gladiatoria, players take on the roles of lanistas, an ancient-world entrepreneur who has invested his wealth and influence in the constitution of a Gymnasium of Gladiators with the aim of making it the most glorious of the Empire. Recruit trainers, armourers, medics, and even prostitutes to assist you in training free men, slaves, criminals, and war prisoners to become gladiators to fight in the arenas throughout Italy.