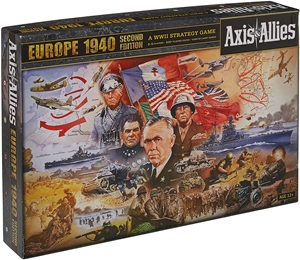 With the invasion of the Low Countries and the allied evacuation from Dunkirk, the German army is poised to march on Paris. Designed and developed by Larry Harris, Axis & Allies Europe 1940 introduces France as a new playable ally, while Italy serves as a second Axis power along with Germany. The two new combat units that debuted in Axis & Allies Pacific 1940 - Tactical Bombers and Mechanized Infantry - make an appearance, while all-new rules for neutral nations, naval and air bases, and convoy disruption add even more depth and historical accuracy to this massive game.