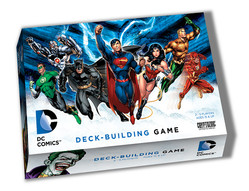 Batman! Superman! Wonder Woman! Aquaman! The Flash! Green Lantern! Cyborg! The Justice League of America is ready for action - are you? Fight the never-ending battle for truth, justice, and peace in the world's greatest super-hero universe with the DC Comics Deckbuilding Game! Power up with Bulletproof and Super Speed! Equip yourself with The Batsuit! Unlock special abilities and unleash devastating card combos against your opponents! Craft your hero deck into a well-oiled machine to take on the most vile villains in the DC Universe in your quest for Victory (Points)! The DC Comics Deckbuilding Game comes complete with 214 Game Cards, seven Oversized Super Hero Cards, and a rulebook.