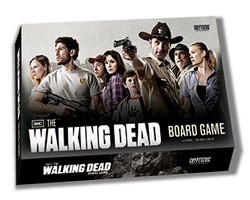 Based on AMC's hit zombie television series, players in The Walking Dead Board Game assume the roles of their favorite characters from the TV series battling the Walkers to survive in a post-apocalyptic, zombie-infested world. Players begin as humans fending off the zombies - but if they succumb to the undead hordes and become a brain-eater, they can cooperate with others who have been infected and team-up against the remaining "human" characters in the game! The Walking Dead Board Game includes two scenarios: "Team Game" and "Survival Mode" - ever-dwindling resources make every decision "life or death", and as the supplies run out, the tension ramps up!