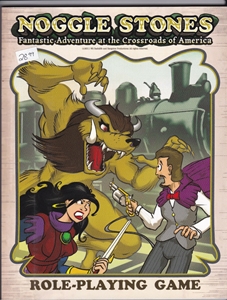 While searching for the lost ruins of an ancient temple, the mad goblins of Annwfn discover a most peculiar scroll, and unleash a terrible evil that reaches from their faerie world and into the innocent, 19th century town of Willow Prairie. Can the innocent townsfolk stand any chance against the shadowy adversaries that prey on weakness, fear, anger, and hate? Based upon the novel by Wil Radcliffe, the Noggle Stones roleplaying game puts the players in the roles of either mysterious creatures of myth and legends, or the humble people of turn-of-the-century America as they seek to overcome the threats of dire combat, of races against time, and of their own inner demons!