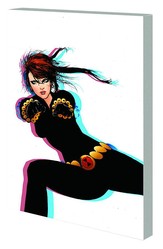 A senator is seduced and assassinated, and his journalist son follows the trail to a fatally sexy Soviet agent. This deadly 'woman in black' moonlights as a high-class escort to lure powerful men into her web of blackmail and death. But Nick Crane believes he's finally found his father's murderer, and he's about to expose...the Black Widow! Plus: Tony Stark gets his spy on, and the Black Widow proves she's an Iron Man's best friend, when the Armored Avenger goes undercover to take down a foe using his own decommissioned tech! Collecting BLACK WIDOW (2010) #6-8 and material from IRON MAN: KISS AND KILL.