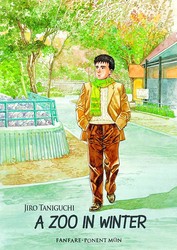 Kyôto, 1966. Young Hamaguchi works for a textile manufacturer while dreaming of becoming an artist, until an incident at the zoo forces his hand. Invited to Tôkyô by an old school friend, Hamagushi interviews at the studios of the famous mangaka, Shiro Kondô, where he discovers the long hours of meeting deadlines along with the nightlife of the capital. Multi Eisner-nominee Taniguchi recalls his beginnings in manga and his youth spent in Tôkyô in the 60's in an account of his apprenticeship where all the finesse and elegance of the creator are united to illustrate those first emotions of adulthood.