an issue of Princess Ugg by Oni Press 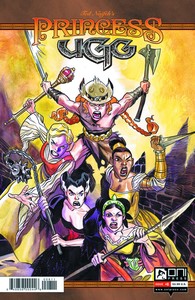 NM Price:
$3.99
Release Date:
3/18/2015
Issue not yet rated - You rated this a 0
Previous Issue Next Issue
Issue description
Writer: Ted Naifeh
Artist: Ted Naifeh Warren Wucinich
The Grimmerians abandon their fight against the frost giants after learning Ülga's being held in captivity. Using what little she's learned of diplomacy, Ülga tries to find a way to end the threat of war before the kingdoms destroy each other, but she'll need the help of the other princesses.