an issue of Daredevil: Redemption by Marvel Comics 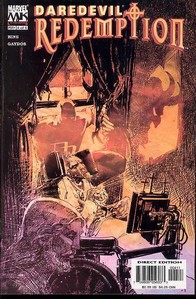 NM Price:
$2.99
Release Date:
5/4/2005
Issue not yet rated - You rated this a 0
Previous Issue Next Issue
Issue description
Writer: Michael Gaydos David Hine
Matt Murdock’s nightly patrols as Daredevil backfire spectacularly in the small, God-fearing town of Redemption, as the fight turns dirty and "the devil" is accused of a crime he didn’t commit. Battling the public outcry paints a bullseye on Matt’s chest – even as he becomes more and more certain his client, Joel Flood, is not guilty of the gruesome, ritualistic killing that has the townfolk literally up in arms. But time is running out, a horrific secret will be revealed, and the only one who can corroborate Joel’s alibi is his mute, paralyzed father, who hasn’t spoken in over three years.