an issue of Armor X by Image Comics 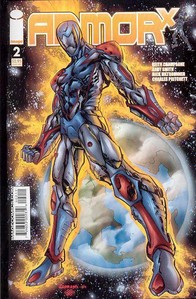 NM Price:
$2.95
Release Date:
4/13/2005
Issue not yet rated - You rated this a 0
Previous Issue Next Issue
Issue description
Writer: Keith Champagne Andy Smith
The Concept: Carson Deeds is an emotionally troubled 17-year-old time bomb with a loaded shotgun underneath his bed and a list of classmates in his sites. When a mysterious suit of armor falls into Carson's unstable hands, he finds himself wielding the power to live out every revenge fantasy he's ever imagined against a world that he feels has done him wrong.

This Issue: While a police detective with a hidden agenda starts piecing together the story of what happened at the senior prom, Carson Deeds begins to explore the capabilities of his new suit of armor. In the meantime, the armor begins testing Carson, pushing him towards achieving his basest desires. Is an innocent blind girl the only person who can stop Carson before he goes too far?