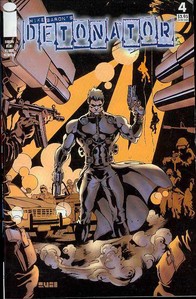 NM Price:
$2.50
Release Date:
11/2/2005
Issue not yet rated - You rated this a 0
Previous Issue Next Issue
Issue description
Writer: Mike Baron Mel Rubi
The Concept: Frank Grace attended the South Dakota School of Mines, learned to handle explosives and went to work for Grindcorps. Leasing a mine they knew to be played out, Grindcorps took out an enormous insurance policy, doctored Frank's charge so that it brought the mountain down on him, then collected his life insurance. Unfortunately for Grindcorps, Frank emerges weeks later, obtains plastic surgery in Costa Rica and returns to wreak his vengeance. The Detonator can explode anything from a skyscraper to a wine glass with no collateral damage.

This Issue: This is the Big One. Detonator has set in motion forces he cannot control, pitting crime boss against crime boss, with the fate of the world in the balance. The extravagant cruise condo known as the Floating City is actually the world’s biggest bomb, and it’s headed for the Panama Canal. In Montana, the feds close in on Detonator, as he closes in on Manglebaum.