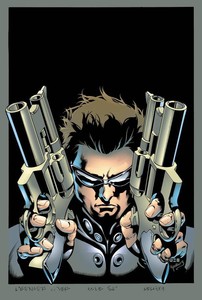 NM Price:
$2.50
Release Date:
1/26/2005
Issue not yet rated - You rated this a 0
Previous Issue Next Issue
Issue description
Writer: Mike Baron Mel Rubi
The Concept: Frank Grace attended the South Dakota School of Mines, learned to handle explosives and went to work for Grindcorps. Leasing a mine they knew to be played out, Grindcorps took out an enormous insurance policy, doctored Frank's charge so that it brought the mountain down on him, then collected his life insurance. Unfortunately for Grindcorps, Frank emerges weeks later, obtains plastic surgery in Costa Rica and returns to wreak his vengeance. The Detonator can explode anything from a skyscraper to a wine glass with no collateral damage.

This Issue: The Detonator blew up Grindcorps' Hong Kong HQ with surgical precision. He thought he got them all. He was wrong. The Twenty Step Vipers sent master assassin Manglebaum to kill Frank. Oakland PD detective McGill Green thinks Frank's a right-wing whack job. Green's sister died in the bombing of a federal building, and Green thinks Frank may have done it. The Twenty Step Vipers are not at peace with themselves. Chafing at Uncle Yang's conservative ways, Roger Yee has sent his own assassin, Sling Blade, to kill both Frank and Manglebaum. The quiet hamlet of Milford, Montana, is about to explode.Brilliant art by Mel Rubi. Hard-hitting dialogue by Mike Baron.