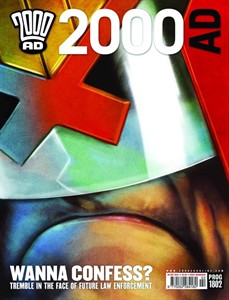 NM Price:
$21.00
Release Date:
3/27/2013
Issue not yet rated - You rated this a 0
Previous Issue Next Issue
Issue description
Critically acclaimed UK sci-fi anthology title 2000 AD features some of the best writer and artists working in comics today! There's a desperate battle on the wartorn streets of London in Savage: Rise Like Lions by Pat Mills and Patrick Goddard; Johnny Alpha shows no mercy to the norms as the mutants turn on their oppressors in Strontium Dog: Mutant Spring by John Wagner and Carlos Ezquerra; Jack Dancer and his crew fight an undead army in The Red Seas: Fire Across the Deep by Ian Edginton and Steve Yeowell; there's assassination afoot in Ampney Crucis Investigates: The Entropy Tango by Ian Edginton and Simon Davis; and the hungry citizens of Mega-City One seek a scapegoat in Judge Dredd: Wolves by Michael Carroll and Andrew Currie!