an issue of Justice League Unlimited by DC Comics 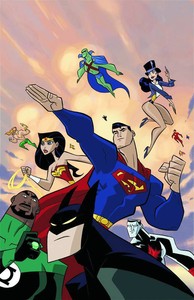 NM Price:
$2.25
Release Date:
9/1/2004
Issue not yet rated - You rated this a 0
Previous Issue Next Issue
Issue description
Writer: Adam Beechen Marc Campos
A new monthly series based on Cartoon Network’s all-new Justice League Unlimited cartoon! JLU features the world’s most powerful heroes from all corners of the DCU. Each issue features familiar JLA members such as Superman, Batman and Wonder Woman alongside new allies such as Black Canary, The Question, Booster Gold, Green Arrow and even Shining Knight! In the pulse-pounding premiere, the League bands together, only to witness its most powerful members calling it quits! What enigmatic foe is responsible for Superman, Wonder Woman and Captain Atom throwing in the towel? Can Zatanna, Batman and The Flash pull it together before it’s too late?